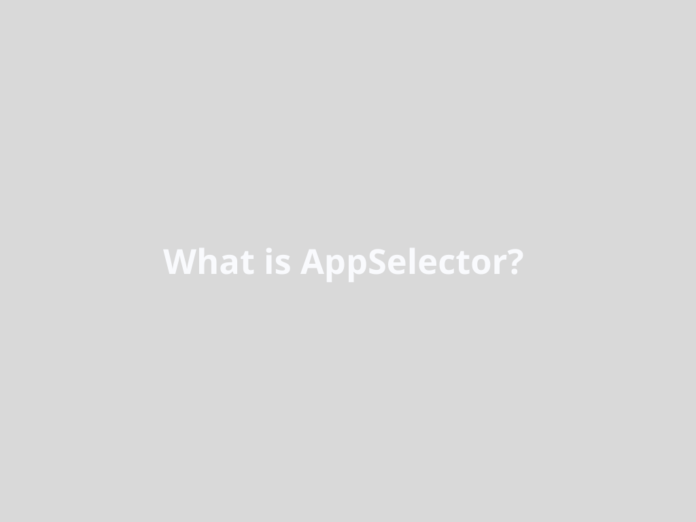 App Selector is an application by T-Mobile that provides you with more control over what applications can be installed on your device when you first set it up.

During the initial setup of the phone, AppSelector adds feasibility to the whole initialization process by allowing you to easily select and install various applications at the beginning of the setup.

Apart from the initial setup, AppSelector can also help you install applications after you perform a factory reset on your device. Since a factory reset brings your phone back to the original unboxed state that it was in when you first bought it, AppSelector is prompted to provide you with app installation options again.

After approximately 15 minutes of setting up your new device or performing a factory reset (and rebooting your device), AppSelector automatically notifies you to either open, delay, or skip opening the application forever.

When prompted with these three options, here is what they mean:

Once the setup is completed, you can find AppSelector in the android device’s app settings. As for the applications downloaded through AppSelector, they can be found in your Apps tray, just like all other downloaded applications.

When it comes to updating these apps downloaded by App Selector, the same is managed through Google Play Store once the initial setup is complete.

As mentioned before, AppSelector is an application by T-Mobile. The majority of people already know what T-Mobile is, but just in case you’re wondering, it is a brand name used by the mobile communications subsidiaries of Deutsche Telekom AG, which is a German telecommunications company. T-Mobile US is a wireless network operator, partly owned by Deutsche Telekom AG. If you have used Verizon or AT&T services before, you could think of T-Mobile as a parallel competition to both these network operators popular in the US.

In case you are wondering what an application developed by T-Mobile is doing on your android device, think of it as collaboration, which in return benefits both the manufacturer of the device and T-Mobile. A handful of T-Mobile-developed apps could come bundled with your android device, such as T-Mobile app, T-Mobile Money, AppSelector, AppManager, etc.

Yes, AppSelector is a safe application. The most legitimate way to vet the safety of an application is to look back at its development background. Given that AppSelector is developed by T-Mobile, an immensely used wireless network service, it is safe to say that AppSeelector is safe and reliable. Since it is uninstallable, it does not act as bloatware either, and you can remove it anytime you want to, more so if you do not require it anymore.

AppSelector can come in handy when you are setting up your device for the first time and need to download applications that you will require on the device. This way, you have a phone that’s more or less ready to be used immediately after the setup, and you do not have to deliberately go to the Play Store to download individual apps one by one.

Another thing worth mentioning about AppSelector is that it gives you a list of app recommendations based on a few options that it prompts you to choose from when you first open the app. This way, you can discover a few hidden gems that you never knew you needed on your device.

What devices come with AppSelector?

AppSelector can be found on Android devices running on Android 6 and above. You can find AppSelector on almost every T-Mobile as well as Metro device. Besides, brands that have collaborated with T-Mobile also host T-Mobile on some of their models, such as Samsung A11 and Samsung A21.

Is it safe to uninstall AppSelector?

If you have used AppSelector during the setup process of your phone, you must be worried that uninstalling it might cause issues on the device and the applications that were installed via AppSelector.

Well, you do not need to fret since deleting AppSelector does not render the applications downloaded through it useless. It is safe to uninstall AppSelector from your device, especially if you do not need it (it is most useful only during the initialization process of the phone).

To uninstall the AppSelector feature by T-Mobile from your device, follow the steps below:

AppSelector will be uninstalled from your device.

How to turn off notifications from AppSelector?

How to fix “Unfortunately, T-Mobile has stopped”?

Another one of T-Mobile developed apps, the T-Mobile app itself can run into errors every now and then, most common of them being ‘Unfortunately, T-Mobile has stopped.’ To fix the error, below we have enlisted 6 solutions:

1. Uninstall and Reinstall the T-Mobile app.

The catch is that T-Mobile can not be uninstalled by the end-user on most android devices. Thus you will either have to root your device to accomplish uninstallation or use ADB and a few commands (linking your phone to the computer) to uninstall the app.

The easy mode on the phone with Android OS allows users to choose the apps that will show up on the home screen in huge icons. When you switch to easy mode on your phone, the T-Mobile app doesn’t work properly. If your device has Easy Mode turned on, we recommend you turn it off for the duration you will be using the T-Mobile App. The app will start working properly if you switch off the easy mode.

The uninstall buttons on the T-Mobile app are grey, so some users are unable to uninstall it from their phones. Although disabling the app would have fixed the issue, it is not an option. Thus, you can alternatively force-stop it instead. It is highly likely that you will be able to solve the issue ‘Unfortunately T-Mobile has stopped’ by navigating to the Settings>Apps>T-Mobile>Force Stop. The error will be sorted when you force close the T-Mobile and reboot your phone.

Some people have switched on background data usage, which causes them to have a hard time with the ‘Unfortunately T-Mobile has stopped’ issue. If you have changed the background data usage settings, we recommend you to switch them off. This should fix the issue, and your T-Mobile app should work properly again.

5. Switch to a different OS

This is no sure-shot way to fix the error (not feasible either) but purely based on consumer experiences, as we have seen on certain community forums so far. It is highly likely that the T-Mobile app on your phone will create issues for you if you are running on Android OS. If you have an iPhone, we recommend you download the T-Mobile app on it, as it will likely work correctly.

The chances of bugs in the app are higher if you have tried all of the methods above and still receive errors on the T-Mobile app or if the T-Mobile app is malfunctioning. App updates can easily solve these bugs. You should look for an update for the T-Mobile app on the App Store or the Play Store. If you can get an update, we suggest you install it to fix the error.

If it is a faulty upgrade, the developers will soon be providing you with a proper and error-free upgrade; until then, you shall be fine running T-Mobile on an older version.

How to Extend Your MetroPCS Service or Add Time to Your...

[FIXED] Alarm silent, even when not in silent mode

Meaning of the circle icon with line through it at the...

Where did my settings icon go and how to get it...