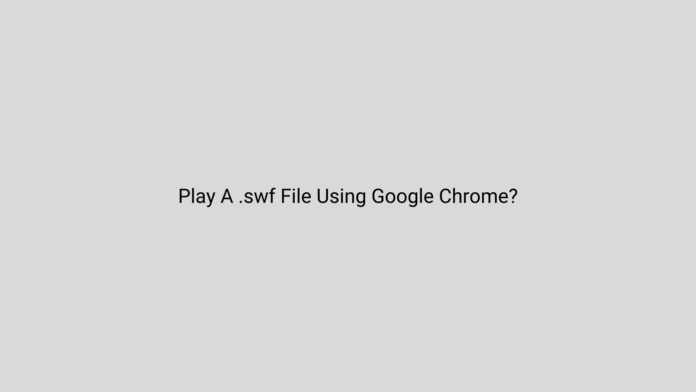 In your experiences, while working on your Windows or Mac devices, it is common to encounter file types that belong to older eras.

An SWF file was a prominent file type a decade back. However, the world has moved on from SWF files. SWF files have not been completely erased; there are still users of SWF files. For opening an SWF file on Google Chrome, you will have to change the Flash settings.

Let’s jump right into it.

What Is An SWF File?

The origins of the SWF file go back to May 1996, when a company called FutureWave Software defined the SWF file.

The primary objective of an SWF file was to create files capable of displaying entertaining images. These files take little space on your hard disk.

Typically, an SWF file comes in Adobe Flash Player format and is used for multiple purposes like vector graphics, action scripts, and multimedia. The SWF file marked its journey from FutureWave to Macromedia and was finally taken by Adobe.

Serving the purpose of interactivity and function, an SWF file primarily contains applets and animations. Most of us know about browser games –free-to-play games that could be played on a web browser. These games were developed using Action Script. Browser games are a common example of an SWF file.

Programmers have developed SWF files using Adobe products like Flash, Flash Builder, Adobe Animate, and After Effects. MXMLC is also a common command-line application compiler – a part of the Flex SDK, which is available for free.

The End Of SWF Files

On December 30, 2020, Adobe announced the discontinuity of Flash Player on web platforms. This resulted in the ending of SWF files too. However, it is not impossible to run SWF files on web platforms that still support the files with a few tricks and hacks.

SWF files have always been questioned in terms of security because the files contain malware and viruses. This nature of SWF files made Flash videos, vector graphics, and animations less popular in the last five years.

HTML5 is presently the king of web-based video formats. YouTube, the most popular video streaming platform, uses HTML5 format instead of SWF for streaming videos.

So, an SWF file has become extinct and Flash Player obsolete. However, many users still want to know how they access pre-existing SWF files on Google Chrome specifically.

How To Open An SWF File On Google Chrome?

Before you try opening an SWF file, ensure that Adobe Flash Player and Google Chrome are installed on your device. These softwares are free to use and can be searched via regular Google search.

If you have Google Chrome of an older version before December 31, 2021, Adobe Flash Player would work on your browser smoothly. Although, you must download the latest version of Google Chrome to avoid the attack of viruses or malware.

From here on, whenever you open an SWF file, the browser will open it only when you permit them.

Since you’ve made all the necessary changes in the browser settings, you should test it out. Here are few steps to test an SWF file.

Since SWF files are often risky, defending your device against any virus or malware invasion is also important.

How To Defend Your Device Against Virus And Malware Caused By An SWF file?

Windows Defender Offline is a great tool offered by Microsoft for protection against virus and malware attacks due to SWF files. Microsoft Defender has been in the picture for a long time, but Microsoft has recently made its security systems more powerful.

The question that arises is: why does one need an offline scan?

The truth about an offline scan is when you run an offline scan on a device that is infected or attacked by a virus or malware, the scan runs outside the Windows Operating System. An offline scan temporarily shuts down the operating system, and the scan detects and removes the malware present in the device.

An offline scan is more useful because the operating system is running, along with the malware running in the background when you run a normal scan. This makes it difficult for the defender to detect the malware.

On the other hand, when the operating system stops, the malware becomes more visible and detectable to the offline defender.

How to open SWF files with an SWF player?

Can SWF files be played on VLC?

Generally, a VLC player would support SWF files, but some files do not open. However, an SWF file can be converted into an audio or video format. You can then play it on VLC.

How to convert SWF files into MP4 format using VLC?

What to do if an SWF file infests malware?

Step 2: If you’re using Windows 10, press the Windows + I button and go to “System.” You’ll see an option named ‘system type,’ which will inform you whether your system is 32-bit or 64-bit.

Step 3: After downloading the Windows Defender Offline, you will find three options.

Create a bootable USB drive, CD, or DVD, and restart the computer after inserting the bootable drive.

Step 4: As soon as you restart your computer, it will boot automatically. If it doesn’t, you have to use the bootable drive to boot your computer. You can start the boot menu by clicking the trigger key, which varies from one device to another.

Step 5: Once your boot process is completed properly, you’ll see the offline scan running and removing malware from your device.

Even after the extinction of the SWF file, its uses prevail. Playing an SWF file is not rocket science. It requires a basic understanding of your device and browser. Nevertheless, this article will assist you at all stages.

Remember to run an offline scan after accessing any SWF file.