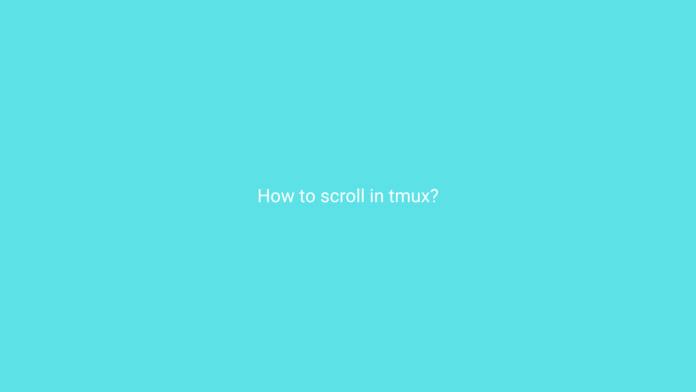 It can be annoying to not be able to scroll back in tmux and if you do it wrong, the whole app and the server might hang.

There are 2 ways using which you can scroll in tmux: using the mouse and using keyboard shortcuts. They can be used together and you can easily configure them in your .tmux.conf.

Before we get to the core of the article, let us first understand how you can issue commands to tmux.

How to issue commands to tmux?

To issue commands, you can use the following three methods enlisted below:

shortcuts: tmux uses a prefix key to issue commands. This prefix key is CTRL+b by default and tmux interprets the keystroke following the prefix as a tmux shortcut.

For example, if you wish to detach from a session in tmux using shortcuts to issue a command (the detaching), you should press the prefix key, i.e., CTRL+b simultaneously and then press d to detach.

How to scroll in tmux?

Aforementioned, there are 2 ways of scrolling in Tmux. You can configure them in your .tmux.conf and they can be used together.

Initially you would not be able to scroll back in tmux using your mouse (that’s why you are reading this post, anyway). The thing is, you will need to enable scrolling back with the mouse in tmux using commands.

Almost every setting in tmux can be applied through the .tmux.conf config file, while you are running tmux. To enable scrolling back with mouse in tmux, here is what you need to do:

This should enable scrolling using the mouse. If you wish to make this setting permanent, you will need to add it to your config without the colon before the config file.

Since tmux has two config files, namely ~/.tmux.conf  and /etc/tmux.conf, the former that is located in your home directory for adding personal settings and the latter for the system wide config file, we recommend making changes to only the personal file (~/.tmux.conf).

Making changes to the personal config file has an added convenience of overriding any setting changes made in the system wide config.

tmux , by default, enables scrolling with keys. All you need to do is press the prefix key and then the arrow keys, depending on how you wish to move around in your session.

Since tmux (or linux, in general) has two text editors, namely emacs and vi, the keyboard shortcuts to scroll back or scroll in different directions differ slightly on both these editors.

To tests vim-keys or emacs keys in tmux on your Macbook (given that it comes equipped with tiny unusable arrow keys), use the following:

If your server is outputting a lot of data, and you want to scroll back down to the extreme end, all you need to do is press Enter. Unlike other times, this shall stop your app from hanging while the server is processing a lot of data.

Key Combinations for vi in tmux:

Moving around in tmux, when in vi mode, can be done using certain shortcut keys once scrolling using the keyboard is enabled (and made permanent).

For example, when we say C+b, you should press and hold the C key and the b key at the same time (without pressing the plus key which is only used for reference).

To scroll down, use C+Down or C+e, while to scroll up use C+Up or C+y.

Key Combinations for emacs in tmux:

Moving around in tmux, when in emacs mode, can be done using certain shortcut keys once scrolling using the keyboard is enabled.

To scroll down, use C+Down, while to scroll up use C+Up.

How to manage panes in tmux?

Once you have created a session in tmux, you will be presented with a single window with one panel inside.

Now, you have split panes in tmux. How do you manage them? Apart from splitting, you can also resize, switch, zoom, force kill and do a lot more with the panes inside the window created in tmux.

How to handle sessions in tmux?

Once you have completed your work with the session you had been using in tmux, you can get rid of it by exiting all the panes created inside or by keeping the session in background so you can use it later if you want to.

To detach from your current session use the prefix key + d. If you want tmux to give you options from which you can choose which sessions you would like to detach, use the prefix key + D (note the Caps Lock). What this does is keep your session running in the background while you are detached from it.

You can re-attach a session and pick up where you left at any point in time, later. However, to re-attach to a session, you will need to figure out which session you want to attach to, first. To get a list of all the sessions running in the background, use tmux ls. Use Prefix + s to display an interactive session list.

How to manage windows in tmux?

Upon the starting of a tmux session, a single window is created automatically. Now, you can attach multiple windows to the same session and switch between these windows whenever required using various commands.

If you are facing an unresponsive window and want to force kill all processes in that window, use Prefix + &.

By default, tmux names windows according to the process that spawned it, thus, to rename a window use Prefix + ,.

What Is Vesta AT&T Prepaid?