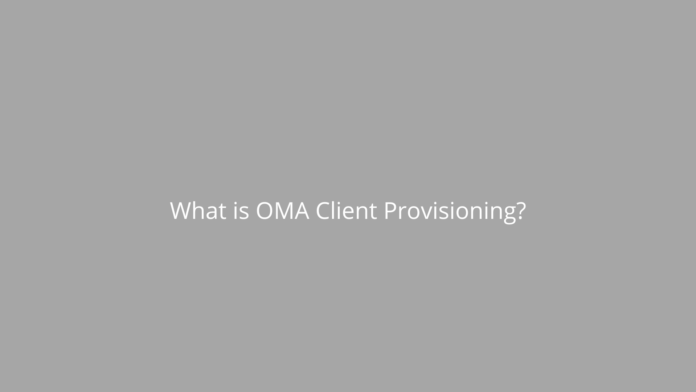 Did you very recently receive a notification that says “OMA Client Provisioning – Configuration Update” or something similar on your device? Well, our bet is you did (or you would not be reading this article).

If you are wondering whether you should peek further and allow the message on your device, this article has everything you need to know.

In the specifics of this article, we shall discuss what OMA Client Provisioning is and a lot more.

What is OMA Client Provisioning?

OMA Client Provisioning refers to a standard mode of operation through which mobile operators are able to send network settings to consumers in the form of special SMS messages.

It is a system level app which acts as an interface between your phone and the carrier. When we say OMA Client ‘Provisioning’ by provisioning we mean the process of sending an OMA CP or OMA Client Provisioning message to the device of the user of the mobile operator.

OMA Client Provisioning messages are received by the end user every time a new device is connected to a mobile operator’s network or when the operating company makes some changes to its internal systems that need to be updated on the user’s mobile network as well.

However the standard of OMA Client Provisioning is also used by large enterprises which manage their own phone fleets.

Large enterprises generally use the standard to deploy company-wide email or web proxy settings to all devices of the employees so that internal email accounts or intranet portals are accessible by the employees of the enterprise.

The Open Mobile Alliance, abbreviated as OMA is a mobile specification resource organization that facilitates mobile service interoperability worldwide. OMA has been contributing to the growth of the mobile market through rapid adoption of mobile data as well as communication standards, besides entertainment.

A key benefit to OMA is the efficacy provided when it comes to issues related to mobile service interoperability. Allo solutions provided tvia OMA are open standards that deliver economic benefits.

When it comes to interoperability issues, OMA collaborates with organizations such as Consumer Electronics Association (CEA), CalConnectSM, 3GPP, etc.

What is a ‘rogue’ or ‘fake’ OMA Client Provisioning Message?

Phishing attacks that result in users’ internet traffic being hijacked can be launched by attackers using a special type of text message used by mobile operators to deliver internet settings to their phones – the OMA Client Provisioning.

All the attacker would need is a decent GSM modem and an off-the-shelf software, and since some device makers’ implementation of OMA Client Provisioning standard allows anyone to send these OMA CP messages to other mobile users.

Most users assume the message came from their operator and agree to install the settings, so this can allow for some very credible phish attacks. The attackers can control the internet proxy which will cause the user’s internet traffic to be routed through that proxy. This will allow traffic snooping and other man-in-the-middle attacks.

Since the Android codebase does not have an inclusion of functionality to handle OMA Client Provisioning standard, device makers went ahead with the implementation of this functionality into the firmware of the Android OS on their own.

This led to differences in how these messages are handled – including UI between devices from different manufacturers. Thus, it gets easy for attackers to send rogue OMA CP messages to the end user in an attempt to hijack their internet traffic.

Which devices are vulnerable to ‘rogue’ OMA CP messages?

As per a group of researchers, the most vulnerable devices were those of Samsung, LG, Sony, and Huawei. Devices from these makers accepted OMA CP messages even when they did not come from a trusted source. Of these, the most vulnerable were the older models of Samsung devices, however, the devices from LG, Sony, and Huawei had some security mechanism in place.

This security mechanism, available in the other three brands’ devices apart from Samsung came in the form of authentication of OMA Client Provisioning messages via IMSI codes.

By this, we mean that Sony, LG, and Huawei required the sender to provide the phone’s IMSI code before they could send an OMA Client Provisioning message to the user’s device.

The catch is that these IMSI codes aren’t all that hard to crack, which means that the attacker seeking to pursue hijacking could obtain an IMSI from the telco provider itself for a nominal fee. Besides, there are a number of malicious apps or data leaks that can be used by hackers to target certain end users with rogue OMA client provisioning messages.

Have the shortcomings been patched?

The good news is that three of the vendors have patched or are in the process of patching this attack vector, after first being notified of the issue in March this year.

The bright side to having the issue addressed in Samsung, Huawei, and LG phones is that they have either patched or are working towards patching the attack vector on their devices, so that only safe and legit OMA Client Provisioning messages pass through.

Samsung included a fix addressing fake OMA CP messages in their patch SVE-2019-14073. LG, too, released a patch LVE-SMP-190006 to address the issue. Huawei, on the other hand, has planned to include fixation of user interface for OMA CP in the next generation of its smartphones, from Mate or P series.

What should you do if you receive an OMA Client Provisioning Message?

Since there is no fool proof method to differentiate a fake or rogue OMA Client Provisioning message from the real one sent by your mobile operator, what should you really do?

On the end-user’s side, it is highly recommended that the user does not accept and install any internet settings since the verification of whether these messages came directly from the operator can not be done.

Alternatively, the configuration of the settings in Android can be accomplished manually and you can obtain the correct settings from your mobile network operator.

If put plainly, the simplest action to take would be to decline all OMA Client Provisioning messages by default. In case you are worried that your mobile network features, such as MMS services or even mobile data may stop functioning after a point, do not worry. All you have to do is contact the telecommunication’s support center and ask them to resend the OMA Client Provisioning message.

How to delete an OMA Client Provisioning Message?

To delete an OMA Client Provisioning message on your device, follow the steps below:

This should likely remove the OMA Client Provisioning Message or notification from your device.

What is OMA Device Management?

The OMA DM protocol uses a subset that is defined by the SyncML framework, which is XML in general. The device is managed through communication between the server and the client.

Using any of the methods available between WAP Push and SMS, the communication is initiated by the OMA server, in a way that is asynchronous. A notification or alert message is said to be the initial message from the server to the client.

A sequence of messages may be exchanged to complete a given device management task once the communication is established between the server and client. OMA DM is able to provide alerts, which can be initiated by either server or client, and are messages that can occur out of sequence. Errors, abnormal terminations, and other errors are handled by such alerts.

In telecommunication, provisioning involves the process of preparing and equipping a network to allow it to provide new services to its users. Provisioning means changing the state of an existing priority service or capability in a National Security/Emergency Preparedness telecommunications service.

The telecommunication industry refers to the provision of services to network elements, which are various equipment connected in that network communication system, as the concept of network provisioning or service mediation.

In telephony, network management database table mappings is the most commonly used method to accomplish this. It depends on the network planning, design and the existence of networking equipment.

Provisioning is about configuring any required systems, providing users with access to data and technology resources, and referring to all enterprise-level information-resource management involved.

The core of the process is to ensure the security of an enterprise’s resources and user privacy by monitoring access rights. Compliance and minimization of vulnerability of systems to penetration and abuse are ensured by the secondary responsibility.

The tertiary responsibility of provisioning in telecommunications is to reduce the amount of custom configuration using boot image control and other such methods.

com.google.Provision is nothing but a malware that targets the Android operating system. Thus, the infection com.google.provision needs to be avoided by users of the Android OS. Many users might be facing this threat due to the fact that there are over two billion active devices using the OS every month.

Once your device is infected with com.google.Provision, it intercepts the Android device administration rights and allows it to download applications. The threat could possibly record information such as the device’s name, location, and even its personally identifiable information.