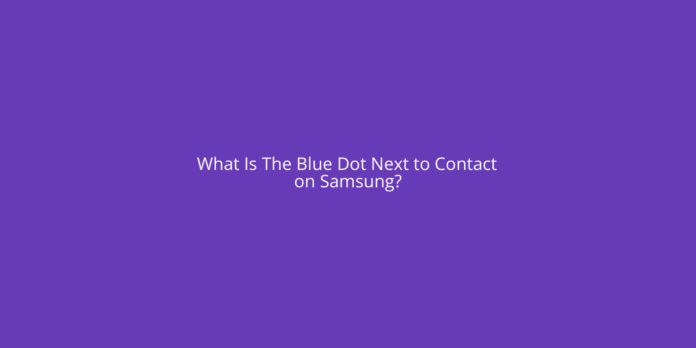 The blue dot next to a contact on Samsung indicates that the Samsung messages app and the carrier device of the sender are RCS compatible or capable.

Your contacts are scanned and connected to your carrier database, which allows the messaging app to know how many of your contacts are using RCS compatible phones and their RCS network infrastructure. It indicates to the contacts that they have met the conditions for sending and receiving messages in chat mode by marking them with a blue dot.

You should be able to send and receive several huge image files at their original resolution without any problems. Additionally, the character count restriction for uncompressed video files and text messages should be increased significantly.

What is RCS messaging?

Mobile operators and phones use a system called rich communication services to communicate with one another. With RCS, the ultimate goal is for it to eventually replace SMS and MMS messaging, which are formats that we’re all familiar with due to the fact that they’ve been there for quite some time.

It was founded in 2007 and acquired by the GSM Association (GSMA), a trade association that represents mobile operators around the world, in 2008. RCS was renamed to the RCS Foundation in 2009. The Global System for Mobile Communications (GSMA) decided on a Universal Profile in 2016, which is a set of standards that all mobile operators, phone makers, and software suppliers can use to assist in the implementation of RCS on devices.

RCS messaging is extremely similar to WhatsApp in that it allows for live chat to take place, as well as multimedia capabilities, and that everything is handled through the data network.

It is regarded as a competitor to Apple’s iMessage service, despite the fact that there are some slight differences in the way the two systems operate.

What is the current status of RCS messages?

The most significant advantage that RCS Messaging has over SMS – and the primary reason why it was deployed in the first place – is that it allows users to send rich, verified messages to others. This means that messages will be able to carry more information, allowing users to transmit things like photographs, videos, and audio messages to one another as well as other information.

In order to avoid relying on third-party software, they will be able to conduct video conferences with one another directly from within the messaging application. As well as the ability to send group messages, the inclusion of little features such as read receipts and indications to signal that other users are composing a message will be made feasible. RCS messages will also be exempt from the 160-character limit that is currently applicable to SMS messages.

Organisations will be able to use RCS Messaging to transmit things such as boarding permits for flights, package delivery notifications, and credit card fraud alerts, among other things.

These are features that Apple’s iMessage, WhatsApp, and Facebook Messenger have provided for quite some time, but Android phones have been lacking a default messaging programme for quite some time. A single app that can handle everything will be important for many – and whether the new CCMI in the United States will simply allow individuals to use the Google app remains to be seen.

What does RCS messaging do?

User’s ability to transmit rich, verified messages is the most significant advantage RCS Messaging has over SMS, and this is the primary reason it was established in the first place. This means that messages will be able to carry more information, allowing users to send each other things like photographs, videos, and voice messages.

In order to avoid relying on third-party software, they will be able to conduct video calls with one another from within the messaging application itself. As well as the ability to send group messages, the inclusion of little features such as read receipts and indications to signal that other users are composing a message will be made available. It will also be possible to send RCS messages without exceeding the 160-character limit now in place for SMS messages.

Businesses will be able to utilise RCS Messaging to transmit things like airline boarding tickets, product delivery notifications, and credit card fraud alerts, among other things.

While Apple’s iMessage, WhatsApp, and Facebook Messenger have all offered similar capabilities in the past for some time, Android phones have been without a default messaging software. A single app that can handle everything will be important for many people – and whether the new CCMI in the United States will only allow individuals to use the Google app remains to be seen.

To enable RCS messages to be transmitted between users, it is necessary for them to be encrypted between the client and the server. Because a corporation must go through a brand authentication process in order to be authorised to send a message using RCS, the protocol should also help to keep spam messages from reaching your smartphone.

Instead of only a mobile phone number, RCS messages received from businesses will include the name of the company in the sender information. This places RCS messages in a better position than SMS messages.