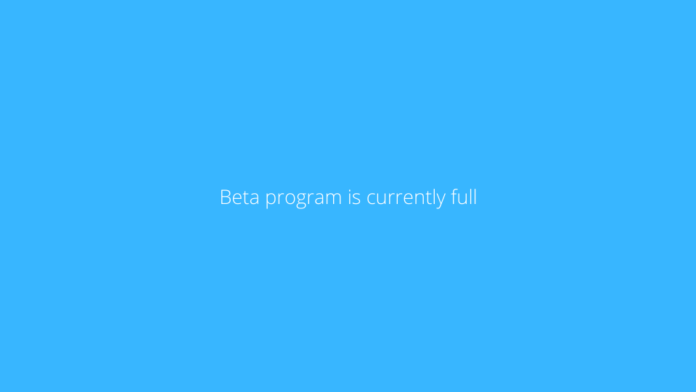 In Android, the Google Play services API layer makes it possible to use specific Google services. Every Android device supported by Google has it. App developers now have a standardized means of incorporating Google services into their apps, thanks to this initiative called ‘beta programs’ for ‘beta testing’.

You can get early access to new Google Play services through the beta program. Developers may use this to test their apps on their own devices, which is extremely helpful. Users around the world will benefit from Google’s ability to better serve them.

Remember that beta versions of Google Play may be less stable than later versions that have been published to the general population. As a result, it’s possible that certain apps or features won’t function properly. For example, your device may continually crash, preventing you from using any service on it.

How to fix ‘Beta Program is Currently Full’?

Beta versions of apps are limited, or you can say they are only for a limited number of people. Most of the time, when you sign up for a Beta version, you might get a message like “Beta Program For This App Is Currently Full,” which means you might have to wait until some people leave the Beta version before you can get it.

If you want to join the Beta version of an app even though it says it’s full, here’s your guide to sidestepping the ‘Beta Program is currently full’ error.

APKMirror is one of the most well-known and largest third-party programme libraries. The apps are available for free download from APKMirror. Here’s how to find Beta Apps using APKMirror:

APKMirror now provides RSS feeds to keep you up to date on all impending beta updates. It will assist you in receiving beta updates once the Beta Program is completed. All you have to do is add the RSS feed to an RSS feed reader.

Note: APKMirror is a safe third-party app repository, but if you’re concerned about your security, you should avoid it.

How to join the beta program?

Note: Make certain that the app in question is already installed on your smartphone in order to receive the beta version of it.

Not every application has a beta version accessible for download. In order to determine whether or not a particular app has a beta version available, first open the ‘Google Play Store’ and then search for the desired app. For example, WhatsApp, Google, Facebook, and other social media platforms. If you prefer, you can go to the profile icon, select ‘Manage applications & devices,’ and then select ‘Installed’. To view the app’s details, choose it and press Enter.

Check to see if the “Join the beta” programme part is available by scrolling down a little further. If so, select ‘Join’ to be enrolled in the beta programme. If this is not the case, it indicates that the developer has not yet made a beta version of their application available.

Please allow a few minutes after joining for an app update to be downloaded.

Please keep in mind that the Beta version of an application may be less stable and may have problems.

How to leave the beta program?

Being a beta tester may be a very frustrating experience at times. New upgrades may cause certain features of the app to become inoperable, making it difficult to operate the app for the purpose for which it was designed. For those of you who find yourself in this situation and would like to revert to the most recent stable public version of the app, please study the procedures below.

Keep in mind that after re-installing the public version, your connected devices and app sources will remain connected, and your dashboard configuration will remain unchanged. If the app dashboard appears to be unfamiliar, please force close the app and restart it from the beginning.

If you leave the beta programme and then remove the app, please keep in mind that any saved data and settings you have made will likely be deleted as well.

If you choose not to participate in the beta programme, your space will become available and may be assigned to someone else. It is not assured that you will be able to reclaim your beta programme space later.

How to use the stable version?

Why do you get the ‘Beta Program is Full’ error?

Beta-version software is still being tested and only a small number of individuals are allowed to use it because it must be a strictly supervised environment. For instance, we would like to have only 100 beta testers. Only one hundred people will have access to download it. Attempting to download as the 101st user results in an error stating that the beta has reached its limit.

How does Android Beta Testing work?

When it comes to beta testing, Google gives you a lot of leeway. Your testing group might be organised in one of three ways.

Anyone with access to your link can participate in the beta testing process. It is possible to build a huge testing community through open beta testing.

There is a downside to using these testers because they cannot leave a review. As an alternative, you may limit the size of your organisation to keep things more manageable.

A more restricted option is to only make your beta group available to people who are invited via email. You can add emails manually, or upload a CSV file.

Alternatively, you can limit your beta group to those who have been invited by email. Email addresses can be manually entered or imported using a CSV file.

If you’re looking for a central location where you and your team can engage with your beta testers, Google+ is a terrific option.

Connecting your Google+ testing community is as simple as going into your Developer Console and doing so. The link to the group can be sent to your testers once you’ve finished.

It’s not over yet, though. It is imperative that you keep your testers interested and provide them with useful input.

As soon as you lose the audience’s interest, you could lose them for good. Tips on how to manage and maximise your beta testers are included in this article.

Keep in mind that you can set up an alpha testing group as well. If you want to try out cutting-edge features on a small group before expanding to a larger audience, this feature may be right for you.

It functions just like a beta testing group in terms of functionality. An alpha group is essentially a testing group that you can release the most recent updates to. There’s no need to wait for beta testing if the upgrade passes alpha testing.

Simply put, testing your app doesn’t take long. To begin, go to the Developer Console and upload your beta APK.

Your beta testers will then be able to test it out for you. It will be rolled out to all live users in a few hours if it passes the testing phase if you click the Promote to Prod button.

You would click on the Move to Beta option to push the version to beta for alpha testing.

Keep in mind that the most recent version of your programme will deactivate prior testing versions and testing stages when publishing APKs to the Play Store. Testing on versions that have been deactivated is not possible. As an illustration:

The alpha version of your programme will be disabled if the beta version has a higher version number.

The Benefits of Beta Testing

Many additional departments can benefit from beta testing, including QC and marketing. From a variety of angles, we’ll examine the advantages and disadvantages of beta testing.

Of course, you have to look for errors and failures. In the real world, putting your app on a wide range of devices and locations reveals issues that may have slipped through the cracks. As well as monitoring and optimising the performance of your app, you can also use this tool to test your infrastructure and backend to ensure that you are ready to scale.

In beta testing, you have the first opportunity to test your app with actual people, and you may learn so much about your customers. Analyzing their in-app activity allows you to see where customers tend to get stuck or give up. Put these figures into perspective by utilising qualitative feedback from user interviews or surveys.

You may use beta tests to improve your onboarding experience so that users can quickly get started and get the most out of your app. Test your documentation in the same way to find any flaws or gaps to ensure that your users have all the information they require.

Beta testing isn’t just a gimmick, but it can actually help your app’s marketing. These events are the finest way for your marketing team to test and improve their marketing message. Aside from testing their channels, businesses may also discover the most valuable and tailor their message for those channels.

Beta tests can be used to seek early feedback and testimonials from your beta testers for the launch of your app in addition to evaluating your approach. Your beta testers might become evangelists for your software if you engage them.

Your support personnel may be unfamiliar with the ins and outs of a new app or feature. Beta testing gives them the opportunity to get to know your app and uncover the most common issues and solutions that customers encounter.

How to Extend Your MetroPCS Service or Add Time to Your...

[FIXED] Alarm silent, even when not in silent mode

Meaning of the circle icon with line through it at the...

Where did my settings icon go and how to get it...