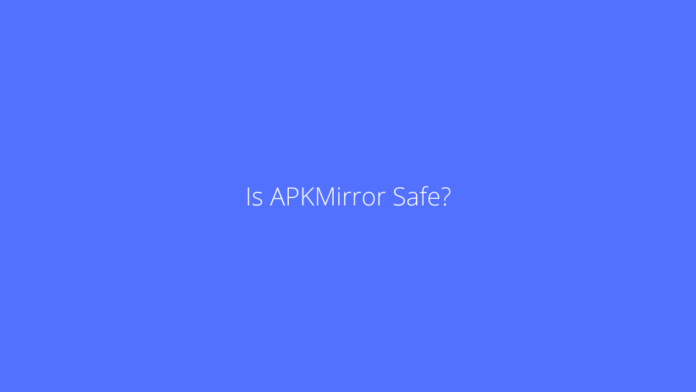 Have you tried sideloading an application before? If yes, then you have probably already heard about APKMirror. In case you haven’t used APKMirror before for downloading apps, you are sure to ask one question – is APKMirror safe?

It is an absolutely legitimate question since downloading APKs from unknown and unreliable sources can be risky, and your device is prone to malware and virus infection. Thus, it is only justifiable if you thoroughly vet an APK downloader before using it.

In the course of this article, we shall further the same question and conclude on whether APKMirror is safe or not.

Before that, however, let us walk you through what APKMirror really is.

What exactly is APKMirror?

APKMirror is a free-to-use service that allows you to download Android Application Package files or APK Files for various applications. APKMirror hosts an extensive library of APK files, some of which may not be available on Google PlayStore and other official application downloading services.

APKMirror is a downloading application website, wherein you can download a vast number of APKs or Android Application Package and later install these APKs on your device to run them as applications. It is a free-to-use application downloading service and hosts an extensive library of applications; surprisingly, you may find APKs of certain apps on APKMirror that are not even available on the Google Play Store.

Who are the makers of APKMirror? APKMirror was developed by Illogical Robot LLC, with the founder being Artem Russakovskii, who is also the Founder of Android Police. APKMirror was founded in 2014 and has ever since becoming a crowd favorite for providing updates of certain applications that haven’t even rolled out on the Play Store yet.

How are APKMirror and Android Police related?

APKMirror is developed by the same company that developed Android Police, with the founder being Artem Russakovskii. AndroidPolice is a piece of popular android news and helps the portal with over 11 million monthly page views; APKMirror, on the other hand, is an application downloading website where you can download APKs from and install them on your device.

The two sites collaborate with each other on a daily basis, almost every day, and APKMirror is managed by the same people that manage AndroidPolice.

You can find applications by their name and developer names on APKMirror. If you open the app, you’ll see a lot of information about the application. You can see the size, requirements, and uploaded date along with the version detail. The original application signature is shown on APKMirror as well. The user can get the app on their computer or mobile device by scanning the QR code. That is how easy it is to download an application using APKMirror.

If you are in a hurry to know the answer, here’s the simplest version of it: Yes, APKMirror is safe. Every application on APKMirror is manually checked by APKMirror’s team before the upload on the original website. This makes sure that the APK files are safe to be installed on your device. The two major precautionary measures are taken by APKMirror to ensure the safety of the APKFiles included in their library is:

APKMirror also has an allowance for free apps, which in turn works toward the advantage of both the users and the website by keeping malware-infected and copied versions of an application out of the reach of the customers.

Above all, APKMirror has received much appreciation and good reviews from its users, which speaks for APKMirror’s safety and reliability on its own. You can check the reviews on APKMirror on various community forums to decide for yourself – we are sure you would not be disappointed if you were wishing APKMirror to turn out to be a safe source for sideloading applications.

However, here is what you should know: APKMirror is a user-uploaded application downloader which means there is always a risk, no matter how minimal it is. So, it is not just APKMirror, but you too who should be taking precautionary measures before downloading an APK file and installing it on your device (no matter how safe and reliable the source is, in case you are sideloading). We’ll discuss in detail how you can check the safety of any APK file, but for starters, it is always advisable to manually check the hash of the APK file with the one provided on a verified application store, such as Google Play Store, or that application’s original website (if it has one).

Why should you use APKMirror? Unlike app stores, APKMirror lets you sideload applications on your android device, even those that are not available on Google Play Store. The brightest part of using AOKMirror is that you can always downgrade to an older version of a certain application if you are not happy with the update provided by the developers. To top it all off, you can directly receive updates for applications, even those that haven’t been rolled out yet. Lastly, if you install an application using the APK file downloaded from APKMirror, and the application receives an update from Google Play Store, the update will automatically be installed on your device.

Note: If you see the last part as a disadvantage rather than an advantage, it is worth knowing that you can always downgrade the application to the older version using APKMirror.

How safe is APKMirror?

Alright, APKMirror is safe and all, but how safe really? Moreover, how does APKMirror ensure the safety of the APKs that are published on the website? Here’s how:

Are there any risks to using APKMirror?

The website is a client-transferred application website. There is a slight risk in this way. According to APKMirror, they check each transfer to make sure it’s safe to use on your device.

There are only a few exceptions to the no-paid apps rule. Sometimes developers make updates for paid apps available to the public to test the release of a new version of the app. There is usually a license check done to make sure the apps were bought previously. J2 Interactive, the developer of the app, provides test APKs on its site, and this is an example of an exception.

How to install apps using APK files from APKMirror?

Direct installation of an APK on a Device

Unlike Google’s PlayStore, where automatic installation of the application occurs on your device, APK files require manual installation. The installation process is just a matter of few clicks; here are steps to be followed:

Below are the steps you can follow to install an application using an APK file downloaded via APKMirror (or any other application downloading website, for that fact):

5 Alternatives to APKMirror that are just as safe

If you are already using APKMirror to source your applications, you probably do not need another website or third-party application to get the job done.

However, if you are looking for an alternative, here are the safest ones available out there:

APKPure is arguably the biggest mainstream competitor, giving a tough edge to APKMirror. The two websites were launched at the same time, and similar to APKMirror, the site abides by security practices to make sure that all the files are virus-free and safe to download.

The question is, how safe is APKPure? The site uses SHA1 to verify the legitimacy of all apps before they are published. New versions of apps need cryptographic signatures that match previously published versions of the app, and new apps need to be matched against other software from the same developer.

The company won’t publish an app if it has doubts about the security or origins of the app. There are no modified APKs that are available on APKPure. Metadata and app descriptions are pulled directly from Google by APKPure.

If you want to roll back to an older version due to features or bugs, there’s a list of previous app releases.

There’s also an Android app for the website that can be used by APKPure users. You have to sideload the app, but once it is up and running, it can be used as a replacement for the play store.

Aptoide has more than 200 million users and has been responsible for six billion downloads. The site offers an app for the Android operating system that allows you to access the store and download APK files directly from your device.

The company is also one of the first to use cryptocurrencies. The site allows developers to increase their revenue share with the help of the AppCoins token.

But why isn’t Aptoide closer to the top of the list? It’s because it allows users to manage their own stores and that it allows mod APKs to be uploaded onto the platform. Although they are well-signaled, if you don’t pay attention, you could download one by accident.

There is no web version of the Yalp Store. F-Droid is one of the best alternatives to the Google Play Store, and it requires you to install the app.

The Yalp Store app can be used to download applications from the Play Store if it is installed on your device. It means that you don’t have to worry about the software being corrupted before you get hold of it.

The Yalp Store can even update apps in the background if you have rooted your device. You don’t have to have a Google account to download the APKs from the Play Store. Many people who are wary of the practices of the internet giant Google would be pleased with Yalp Store if they were looking for a Google Play Store alternative, to begin with.

BlackMart Alpha doesn’t require site registration to access its large library of applications. It’s a safe alternative to the Google Play Store for any operating device.

The good thing is that the interface of Blackmart Alpha is very similar to that of the Play Store. The biggest difference is that all applications on this store are free.

BlackMart Alpha has a lot of applications and features that can be downloaded on a very simple platform. Downloads and installs come without limits, so you don’t have to stress over the same.

Foreign language APKs that are not found in the default Play Store in your locale can be found at APKHere. There is lots of English content for you to find. However, you can also find German, Chinese, Russian, and more applications.

Although APKHere is generally safe, we can’t vouch for the safety of some of the apps that are on APKHere. If you want to install any of the applications built in China or Russia on your device, you need to do your own research and be careful because most of them are not known for their security and privacy practices.